Each formation is separated from the next by low-angle faults known as detachments, which have been driven southward over one another. The Qomolangma Formation, the North Col Formation, and the Rongbuk Formation are the geological units that run from Mount Everest’s peak to its base.

Everest has relatively little natural vegetation and wildlife. Mount Everest’s moss grows at a height of 6,480 meters (21,260 feet). It’s possible that it’s the highest-altitude plant species. Arenaria, an alpine cushion plant, is reported to thrive below 5,500 meters (18,000 feet) in the area. Vegetation is increasing in the Everest region, according to a research-based on satellite data from 1993 to 2018. Plants have been discovered in previously barren regions, according to researchers.

1. David McIntyre and Sir Douglas Douglas-Hamilton were the first to fly above Everest’s peak in 1933.

3. There are 18 distinct climbing routes to the summit, with the most popular being the South Col or the Northeast Ridge Standard.

4. The mountain is pronounced Eve-rest and is named after Welsh surveyor geographer Colonel Sir George. In 1865, the Royal Geographical Society (RGS) gave the peak his name.

5. The individual who has climbed Mount Everest the most times is Kami Rita Sherpa. On May 21, 2019, he climbed the peak for the 24th time.

6. Proponents of a cleaner environment Everest estimates that 8,000kg of human excrement is left on the mountain each year (at an average of 800 climbers per year, that’s 10 kg each climber), and it’s becoming a significant environmental and health issue.

7. Wang Fuzhou, Gonpo, and Qu Yinhua of China make the first climb from the North Ridge in 1960.

8. Helicopters are unable to reach the summit of Mount Everest.

9. The lowest of Everest’s base camps (height 5,200 m in China; 5,300 m in Nepal) may be reached by high-performance helicopters, which is the most costly way to go to or from an EBC.

10. Lhakpa Sherpa is the first Nepali woman to reach the peak of Everest and survive.

11. Jordan Romero of California holds the record for being the youngest person to summit Mount Everest. He reached the top in 2010 at the age of 13 years and 11 months.

12. The only creatures permanently situated on Mt. Everest are jumping spiders. Jumping spiders live at a height of 6,700 meters (22,000 feet) on the Everest slopes, making them one of the world’s highest permanent occupants.

13. On the 1953 British Mount Everest expedition, Tenzing Norgay and Edmund Hillary made the first ascent.

14. Junko Tabei of Japan became the first woman to summit Everest in 1975. More than 500 women have subsequently reached the summit, including the youngest, Malavath Poorna, who summited at the age of 13, and Lhakpa Sherp, who has summited nine times, the most of any woman.

15. Erik Weihenmayer, a blind climber, makes the first ascent in 2001.

16. Climbers use the bodies of those who have died as a marker on Everest. Green Boots, named after its bright green climbing boots, is one of the most well-known corpses.

18. Climbers must reach the summit by 2 p.m. due to the cold and unpredictable weather, or risk being stuck in the death zone or short of camp in losing light and dropping temperatures, not to mention terrible weather. 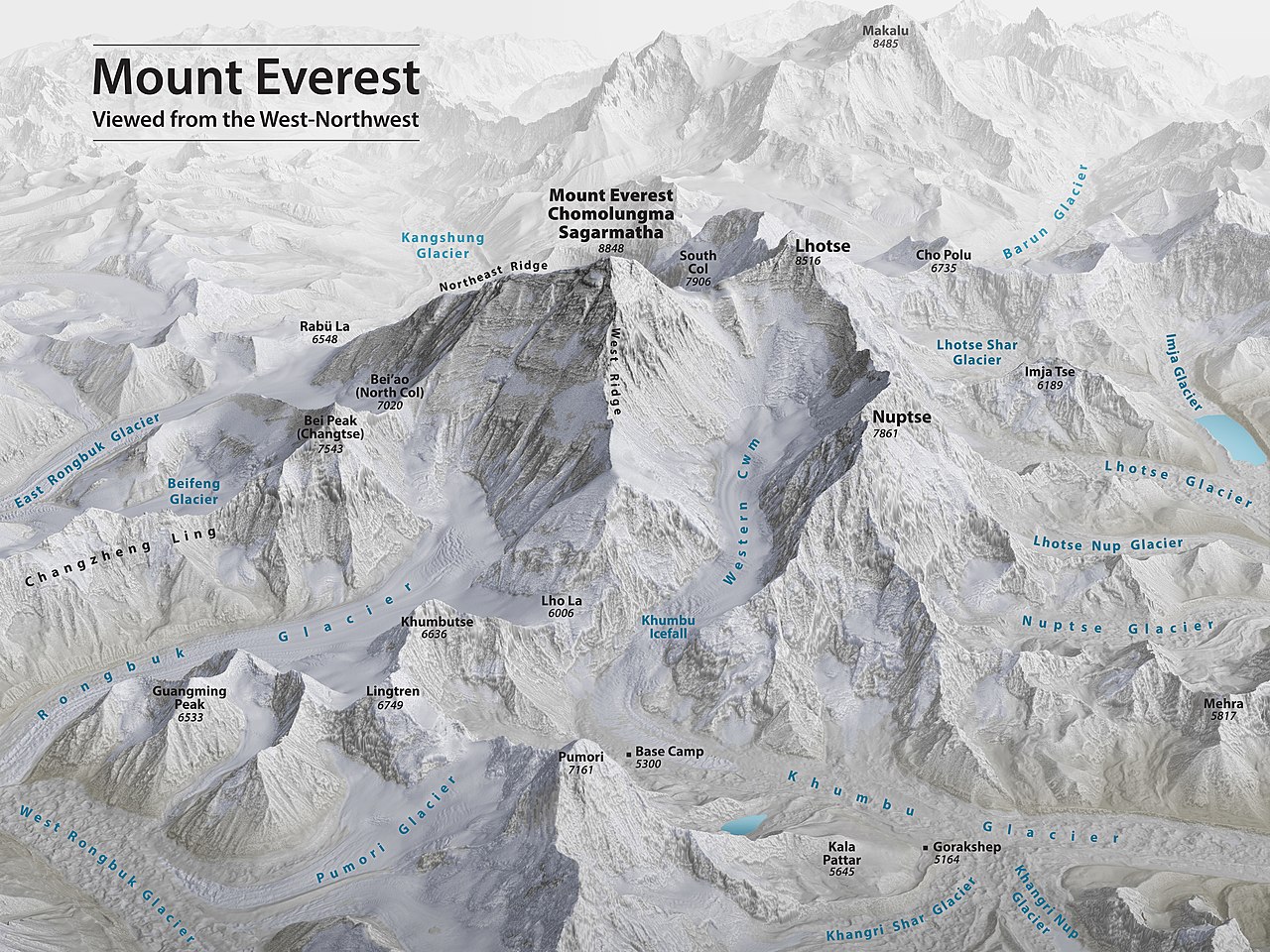 19. The 1952 Swiss Mount Everest expedition makes the first ascent to the South Col.

20. Climbers utilize a variety of basic camps at varying heights as depots or stations on their ascents and descents. For the South Col Route, there are five campgrounds.

21. Reinhold Messner, an Italian climber, was the first to summit Everest without needing supplemental oxygen in 1978. He also accomplished the first successful solo ascent of Everest in 1980.

23. Before reaching the summit, some individuals will discover that their oxygen bottle is gone, and they will have to return to base camp to resupply. On average, an Everest climber will consume seven bottles of oxygen on their ascent and descent, with each bottle lasting around five hours.

25. After one Canadian’s kit was taken and he was abandoned by his Sherpa, the Chinese side of Everest in Tibet was described as “out of control.”

26. Body cells begin to die at the death zone, over 8000 meters, due to a lack of oxygen. At the peak of Everest, the oxygen level is only one-third of that at sea level. The temperature plummets to minus ten degrees Celsius.

27. Yuichiro Miura, an 80-year-old Japanese man who climbed Everest in 2013, holds the record for the oldest person to do so.

28. The limestone and sandstone on the top were discovered to represent 450 million-year-old underwater sedimentary rocks.

29. Kazi Sherpa was the first to reach the summit via the southeast ridge (South Col) in 20 hours and 24 minutes, without supplementary oxygen.

30. The Sherpa are a people that live on both sides of the Himalayas. Because the Sherpa people live in mountainous locations with limited air, they have inherited a unique physical trait: enhanced hemoglobin production.

31. The average temperature at Mount Everest’s peak is -19°C in the summer and -36°C in the winter. Human survival is not likely in these circumstances.

33. Melissa Arnot, an American, climbs for the fifth time, breaking her own record for the most successful summits by a woman who is not a Sherpa.

36. It takes only a few days to climb from the lowest base camp to the peak, but you must also descend. The majority of an expedition’s two months is spent acclimating and waiting for favorable circumstances to break camp and move on.

37. Lydia Bradey makes the first female ascent without the use of supplementary oxygen in 1988.

40. The last 848 meters of the mountain are referred to as “the death zone.” Humans cannot survive for long without supplemental oxygen over 8,000m due to a lack of accessible oxygen.

42. The year 2015 was the worst on Everest, with 19 individuals dying on the peak. Nepal was devastated by a 7.8 magnitude earthquake that killed over 9,000 people and triggered avalanches on Mount Everest. Hundreds of climbers and workers were killed or injured when an avalanche swept through base camp.

44. Didier Delsalle, a French fighter pilot and helicopter test pilot, was the first and only person to land a helicopter on the peak of Everest. With the Eurocopter AS350 Squirrel, he set the record on May 14, 2005.

45. Reinhold Messner and Peter Habeler made the first climb without supplementary oxygen in 1978.

Did you enjoy these interesting facts about Mount Everest?